In Asia the vast majority of people wear their phones round their neck rather than in their pockets like western people. Now after reading this article at ubergizmo it seems that one clever phone maker called Ceatec has decided to create a phone that also purifies the air in a 30cm radius. 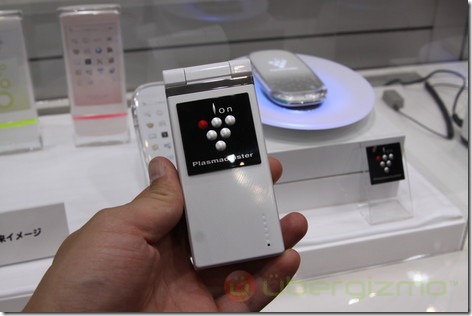 Now i don’t want to rain on this Japanese phone manufactures parade but what! Firstly ionizer isn’t great at cleaning the air – even in a big boxy ionizer air purifier.

Now it might ionize the air – but the benefits of ionized air has not been proven and plenty of studies have occurred.

If you imagine how an air purifier works – it needs to be able to clean all the air in a closed unit if it will be effective. Now this mobile phone might work if its put in a 30cm by 30cm sealed box but will be totally useless if its just hanging round your neck.

This is just a marketing gimmick and i’ll be amazed if it makes it the US but if it does steer well clear!