Generally speaking, all purifiers are a valuable adjunct to the treatment of many respiratory conditions (especially if they are good). But AllerAir has decided to highlight this nice feature of air cleaners and created a special series – the AllerAir AirMedic.

Destined to be one of AllerAir’s best selling products, the new AirMedic is probably the most efficient model that the company has up to this time for areas up to 1500 square feet. This cylinder-shaped device with a 360° air intake system maintains a consistent flow of virtually pure air by removing all particles, gases, chemicals and odors.

AllerAir AirMedic air purifiers are easy to recognize – unlike other AllerAir units, they feature all-metal perforated casing, probably allowing the air to be sucked more easily by the filter.

Speaking of filters, the filtration system of AllerAir AirMedic purifiers does not drastically differ from the one used in AllerAir’s state-of-the-art units. It uses three levels of defense – first, the pro-dense pre-filter captures large particles and does not let them clog the HEPA. Almost all smaller-sized particles (down to 0.01 microns) are then captured by a medical grade HEPA which meets strict standards, such as the European Norm 1822. 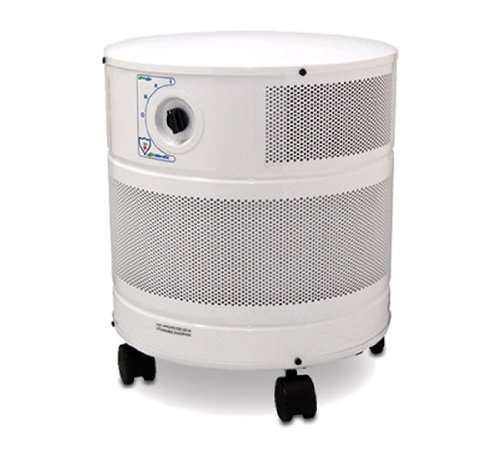 As for the other two medical air purifiers in this series – the AllerAir AirMedic D Purifier with Vocarb Carbon and the AllerAir Air Medic + Vocarb UV Air Purifier – they come with 18 lbs of specially blended vocarb carbon, which targets and neutralizes Volatile Organic Compounds (VOCs).

And if you want some additional protection that will help you kill airborne germs, the AllerAir Air Medic + Vocarb UV Air Purifier also comes with an ultraviolet germicidal light.

If you have some medical condition which you would like to keep under control using an air purifier, one of AllerAir’s AirMedic units in the house is more than sufficient for keeping the disease under check or preventing it.

Air Purifiers for Every Budget!