HEPA (High Efficiency Particulate Air) filter material was first invented in the 1940’s and used during World War II by the United States Government. It is used in the Manhattan Project to stop the radioactive particles from escaping out of the scientific and military laboratories. 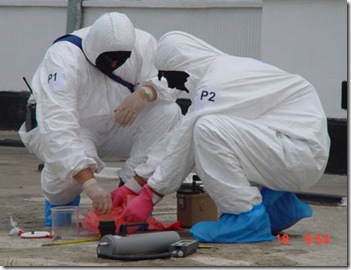 HEPA filters are composed of microfibers that are between 0.5 and 2.0 microns (one-millionth of a metre) in diameter and randomly arranged to form flat sheets. Microfibers are made of a glass-like substance boron silicate, shaped into flat sheets like the process of making paper. To make the filter, the flat microfiber sheets are pleated and separated by baffles. The reason why the microfibers are pleated is to increase the filter surface area and the baffles will guide the air into the filter. 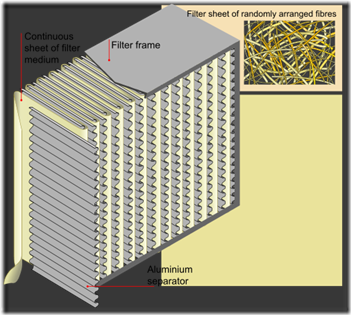 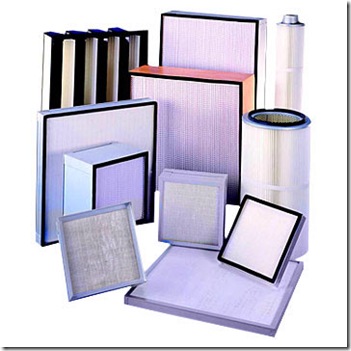 HEPA is considered today as the most efficient particulate filter type available, according to the independent authorities. A lot of commercial HEPA air purifiers also feature other air purifier technologies depending on the type of indoor air contaminants. source

There are four mechanisms on how particles are trapped in the HEPA filters. They are as follows:

1. Interception – is a mechanism where the mid-sized particles following the flow of the airstream gets attracted to the fiber’s stronger force at a distance of 1 radius of a fiber and stick to it.

2. Inertial Impaction – is a mechanism that occurs to large particles (above 0.4 microns). At first, large particles follow the path of the airstream and when the air change direction as it passes around the fiber, the large particle continues to its initial path and then collides with the fiber. As the air flow speed and fiber density increases, inertial impaction also increases.

3. Diffusion – particles that are very small (less than 0.1 microns), are delayed and impeded in their path through the filter and will not follow the air’s streamlined path because they will collide with the gas molecules. This behavior is the same to Brownian motion. The delayed path raises the possibility of the particle to be captured by either interception or inertial impaction. Diffusion mechanism, at lower air flow speed, is dominant.

4. Sieving – also called “straining” is the most common and simplest mechanism in filtration. It works the same as the kitchen strainer. Particles larger than the pores or holes of the fiber sheet matrix are blocked from passing through. 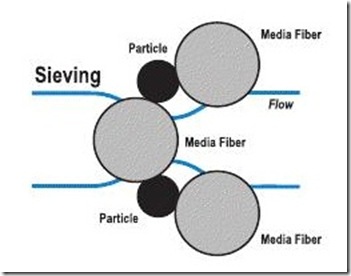 Below is the filter efficiency chart of the four filtration mechanisms: 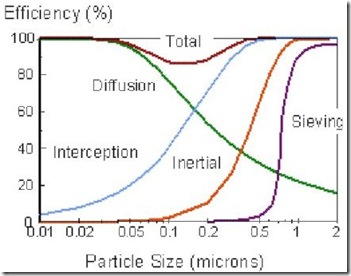 When buying air purifiers, it is best to choose the ones with “True HEPA” or medical grade HEPA filters. You must be careful when buying HEPA air purifiers, because not all air purifiers with HEPA filter in the market can achieve the efficiency of 99.97 percent in removing particles less than 0.3 microns in size.