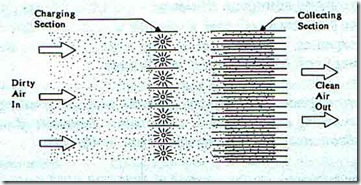 When the dusty polluted air enters into the electrostatic precipitator, the particles in the air will be given a charge as it passes through the high voltage electrical field. The particles that have been given a charge will then pass through a series of collecting plates that are alternately charged. The charged particles are repelled by plates with similar polarity as the particles and attracted to plates with the opposite polarity. This attraction and repulsion of particles have the same principle to how a magnet works.

The dual- stage electrostatic precipitator contains two parts, the collecting and the charging sections. The entering mist, grease, smoke, and other particulates in the charging section will pass through the ionizing wires which give the particles a positive charge. In the collecting section is the secondary electrical field, the negatively charged plates made from aluminum will attract the positively charged particles, causing them to stick into the plates and making the ejected air free of contaminants.

The electrostatic precipitator can remove dust, common allergens, and particulates. It is very efficient but its efficiency will degrade as the collector plates become dirty. However, charged particles that escaped the collecting plates may stick to walls or any objects in the house and soil them.

– Changes in temperature and pressure are small

– It is possible to have a huge flow rate

– Particles with very low or high resistivity are hard to trap

– To maintain efficiency, collecting plates must be kept very clean

Consumer Reports for the past 15 years has recommended some air purifier that uses electrostatic precipitators as a filter. They recommended Aprilaire 5000 and Friedrich C-90B because it only emits a small amount of ozone and they have a low yearly maintenance costs. Electronic air purifiers like ion generators and electrostatic precipitators can produce some byproduct like ozone. Ozone is a known lung irritant; it can decrease lung function and cause adverse health effects. 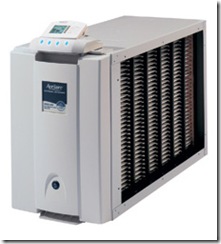 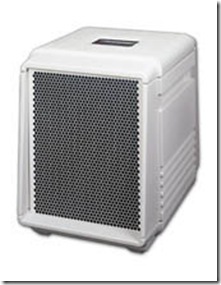 However, Consumer Reports now believe that every air purifier products that give off even tiny amounts of ozone (fewer than 50 parts per billion) are not the best choice for you. Research is warning against adding ozone to the indoor air. They also believe that there should be more research conducted to know the effects of low level exposure to ozone.