Surround Air is a leading manufacturer of air purifiers and air cleaners for both residential and commercial use. The brand uses proven technological features such as HEPA filters, activated carbon, and ultraviolet (UV) light. 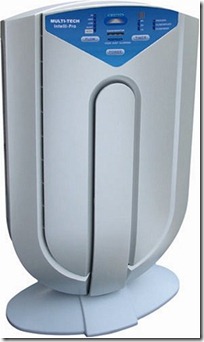 As just one example, the Surround Air Multi-Tech Air Purifier removes a number of pollutants, including dust and dust mites that are captured by the HEPA filter. The ionizer in the air purifier increases the efficiency of the filters. It does this because it causes airborne particles to "clump" together, which makes them easier to catch. Additionally, according to the US Department of Agriculture, negative ions cause particles in the air to "drop out" from the air, and are very good at keeping dust out of the air that you breathe.

Ultraviolet light not only kills dust mites, but if it radiates in the proper wavelengths, it can kill airborne pathogens like viruses and bacteria. A high quality UV lamp is a great feature to have on an air purifier, particularly in settings where a person’s immune system is compromised, or where someone is caring for a sick person and wants to minimize the chances of catching the viral or bacterial illness.

Surround Air HEPA air filters are great at capturing mold spores and microscopic fungi from the air. The ionizers help in this process, and the UV lamps will kill toxins associated with mold. Surround Air ozone sanitizers are very effective against smells such as the smell of mildew, and the ozone sanitizers can be switched off and on separately from the rest of the machine if desired.

Another great feature of the Surround Air purifiers is that they can significantly decrease the amount of carbon monoxide in the air. Carbon monoxide is odorless, but can be very dangerous. The study on ozone removal was done in a London hospital and was published in a scientific journal, the European Respiratory Journal.

Pollen and other airborne allergens are all but eliminated by HEPA filters, which are considered by most sources to be the most effective filters for allergens. The ionizers on Surround Air purifiers help increase the efficiency of the filters by causing particles to clump together. This makes them easier to trap and remove from the air. The ionizer also causes airborne particles to precipitate out of indoor air it captures.

With chemicals and volatile organic compounds (VOCs), the Surround Air purifiers’ carbon filters are extremely effective absorbers. This means that chemical and gas smells are effectively removed, and the ionizers help to neutralize chemical smells even more. Germs and virus are effectively removed and killed by the Surround Air UV lamps, which radiate in wavelengths that are fatal to airborne bacteria and viruses.

In summary, Surround Air brand purifiers use numerous approaches to cleaning the air, all of which work together to achieve superior results at reducing indoor air pollution.