The Coway AP-1009CH Air Purifier is built in Korea by Woongjin Coway. The brand was introduced to the U.S. in 2007, and was rebranded by retailers like Lowes and Sears. Coway dominates the air purifier market in Korea, claiming 40% of sales there. The AP-1009CH is a mid-market product at $279 and is sold by Amazon, Walmart, and AirPurifiersAmerica.com. EPA Energy Star states that the Coway AP-1009CH has a clean air delivery rate (CADR) of 186.9 for dust, 149.9 for smoke, and 203.8 for pollen (for an average of 180). These rates make this air purifier suitable for small and medium rooms. 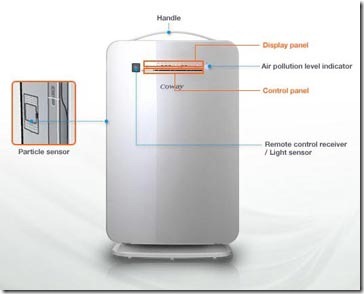 The AP-1009CH has a three stage filter system and four fan speeds, from silent to turbo. The first filter is a washable pre-filter, which is followed by an activated carbon filter for removing odors. The main filter is a 3M HEPA filter that is designed to capture 99.97% of particles greater than 0.3 microns in size. The user manual suggests that when vacuumed regularly the HEPA filter can last up to three years. The pollution indicator is a lamp that goes from blue to red depending on air quality levels. The indicator resembles a mood ring.

This air purifier has a rounded, futuristic shape and is pitched toward women, with floral designs on the product literature. Complaints about the AP-1009CH air purifier have been few, with some users reporting a temporary odor when the machine is switched on for the first time. It is extremely quiet, at only 22.4 decibels, which is suitable for sleeping. It measures 25.8 x 14.3 x 8 inches in size and weighs 13 lbs. It stops automatically when the front cover is open or removed. This air purifier earned the EPA Energy Star rating, using only 37.8 watts on its highest setting. It comes with a one year warranty.

The bottom line is that even though the initial price may seem high, the AP-1009CH has low maintenance costs and energy consumption. It is very attractively designed and suitable for those who want clean air, but it is not powerful enough for those who have serious health issues. The washable carbon filter is fairly light duty, but can tackle odors fairly competently. It is stylishly designed, very quiet and is considered a good value in terms of price and performance.