This purifier was first seen at the design awards when the technology won an invention award in 2008. Now its finally available to buy for $199 from Amazon.com. 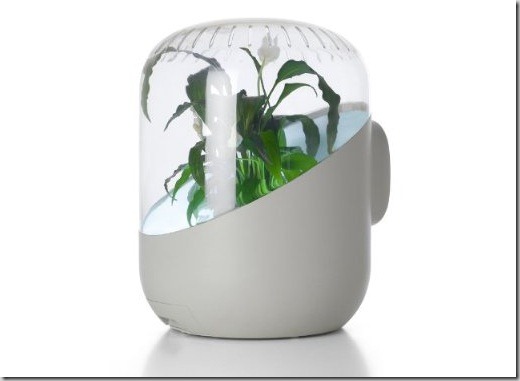 The purifier is very different from your average consumer purifier and actually uses plants to clean the air of toxins using the plants own filtration system. One of the benefits of such a plant air purifier system is that it can clean the basics such as dust and pollen but also problem chemicals such as benzene and formaldehyde that is often now found in new upholstery and carpets.  In laboratory tests, it was shown that the amount of formaldehyde in the air was reduced by 80% in just 1 hour of running the purifier.

The Andrea air purifier is created by Le Laboratoire and has combined nature with a machine to help clean your air.

Once we got our hands on the device we had a few minor issues with the unit. Firstly the fans that push the air through the system are not particularly quiet so you might have to rethink putting one in your bedroom. I am sure that in future versions that some of these minor issues will be ironed out.

You can use any plant in this purifier but the designers recommend that you go for a plant with good natural filtration such as aloe vera or spider plants.