You can purchase one device to act as an air purifier and ionizer. Ozone-ionizer air purifiers should not be confused with HEPA filter air cleaners, but an ionizer may well also contain a HEPA filter for removing particulate matter from the air. 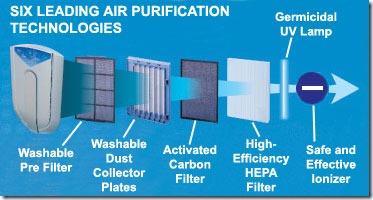 Ozone is a gas naturally present in air; when it is abundant, it creates that fresh smell that occurs in nature just after a lightning storm. Air purifier and ionizer systems generate ozone by ionizing the air which passes through them. They clean bacteria and fungus from the air by penetrating the cell walls with ozone and rupturing the cell of the pollutant.

There are two basic types of ionizer air purifiers. Needlepoint ionization charges the air around the particulate matter with negative ions. These ions attach to particles such as dust, smoke, pollen, animal dander, and other matter, causing the particulate matter to fall out of the air down to the ground or floor level. Radio ionization is the newest technology and creates safe radio waves that ionize the air to cause particle to drop out of the air in the room and even surrounding rooms. Needlepoint ionization air purifiers effectively remove the matter in a seven to 10 foot radius while radio ion air purifiers can clean up to 50 feet away, depending on the efficiently of the model selected. 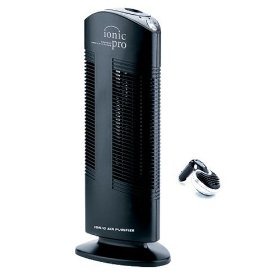 It should be noted that the ozone level generated by the air purifier and ionizer should be adjusted per factory specifications. Too much ozone can irritate mucus membranes and it has been reported that pet parrots have died when exposed to too much ozone.

The idea behind combining an air purifier and ionizer in one device is to ensure the maximum amount of pollution and particles are removed from the air. Not only will the ions work to cause matter to fall out of the air but the filtration system will also remove particles. If the unit includes a HEPA filter, very small particles can be trapped in the filter. These combination devices offer the cleanest, best-smelling air possible at affordable prices. You should compare available models to learn about the benefits of each one and purchase one designed to clean the air in the space in which you plan to use it.