I am sure you have already heard of the Iqair Healthpro plus purifier as it has won numerous industry awards. The Iqair plus purifier is the Cadillac of the air purifier world. The reason that the Iqair purifier is so well respected is because of the sheer amount of particles that in can block using its four stage filter system. 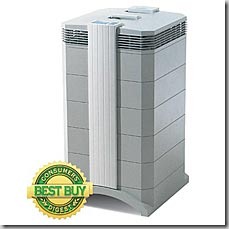 The average purifier will be able to stop most particles over 0.3 microns – which is small but in fact 90% of all airborne particles are actually smaller than 0.3 microns! When people complain about their air purifier not working its probably because most purifiers only remove 10% of all the particles in the air. If you suffer from a pollen allergy or asthma, 10% will be useless to you.

The IQair includes a HyperHEPA filter as part of its four stage process which can deal with particles down to 0.003 microns! The guys at IQair actually guarantee that this purifier will remove at least 99.5% of all particles bigger than 0.003 microns.

Finally we have a purifier that can successfully remove enough particles to relieve the symptoms of an allergy sufferer. The IQair plus purifier removes particles that are 100 times smaller than those that are picked up by your average high street air purifier.

Yes, whilst most air purifier make wild claims about their machines,  IQair actually test your machine and filters before it is sent to you. Each purifier will come with a 2-page performance certificate that is filled out by hand by an IQair technician.

So how does the IQair Purifier actually work? 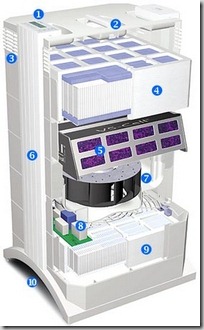 First Stage: A micro-particle filter that removes the largest particles such as pet dander, spores and pollen particles.

Third Stage: Chemisorptions using pellets which is able to remove toxic chemicals that are found in the home such as formaldehyde.

Fourth Stage: This is the nano fiber Hyper HEPA filter that will remove 99.7% of particles under 0.3 microns and 99.5% of particles larger than 0.003 microns. This stage will catch all viruses, bacteria and even particles caused by smoke and automobiles.

If your fed up of using an air purifier that fails to remove enough particles then we suggest you check out this purifier from IQair.

1 thought on “Iqair Healthpro Plus”