Cheap air purifiers often end up more expensive than the expensive ones, because you have to replace them (or filters) often. If you rather prefer expensive but solid things, the Austin Air HealthMate HM 400 is your kind of air purifier.

Even by the looks of it, you can tell that the Austin Air HealthMate HM 400 is much more powerful than your average air purifier.  It efficiently cleans up to 1500 square feet, which means that one unit would be enough to clean the air in an entire house (if it is not too big).

Plus, it is very well made. This thing is extremely sturdy and is made of heavy material. It weighs about 45 pounds, so it will not be picked up by your children without some effort, but the wheels on the bottom make it very easy to move around the house.

The Austin Air HealthMate HM 400 removes 99.97% of particles down to 0.3 microns in size in four stages – first, easily visible particles like dust, hair and pet dander are sucked into a prefilter, and medium-sized particles like molds, spores, pollen, even smaller ones like chemicals, gases and odors and harmful micro-organisms  (bacteria and viruses) are removed at next stages. 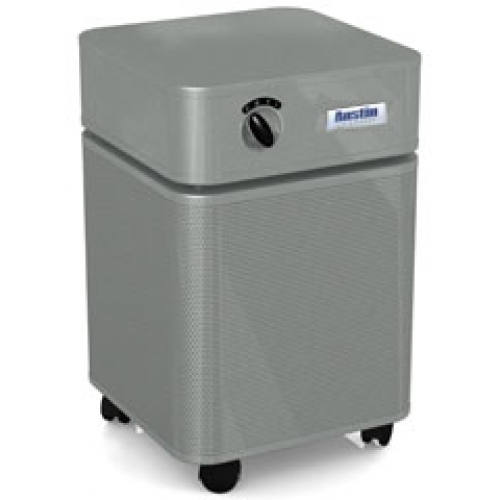 And while many of the cheaper units have multiple filters that have to be changed frequently, Austin Air not only claims that the HealthMate HM 400’s filter lasts for 5 years, but also provides a warranty on the filter. If you do the math, you will probably see that you could buy a new unit every five years instead of replacing the filter and still spend less when compared to many of the air purifiers with lower initial costs.

If you are worried about the sound, the Austin Air HealthMate HM 400 has three sound settings. On 1, the unit easily blends in with ambient noise. You won’t have to turn up the TV any louder and can talk normal. On 2, the TV has to be a little louder, but does not stand in the way of conversations. On 3, the unit is as noisy as an AC unit fan – quite noticeable. However, you will be able to sleep if the Austin Air will be running in your bedroom at Setting 1 and 2.

Overall, the Austin Air HealthMate HM 400 does a great job of cleaning the air and the expense is well worth it, as the quality of this product cannot be matched by less expensive purifiers.