According to ancient Romans, a name is not just a name but also a symbol, and, if so, AllerAir named their Exec purifiers just right – they are certainly able to execute and deliver.

There are a few of these babies in each series, and they certainly do not lack power – each of them is able to clean the area in a 1500 square feet area, using a four-stage filtration system. The AllerAir Exec air purifiers eliminate the three factors that contribute to poor indoor air quality – a pre-filter that traps dust, an activated carbon filter adsorbs chemicals and odors and a medical grade HEPA filter removes 99.97% of all airborne particles in the air, including particles as small as 0.3 microns. 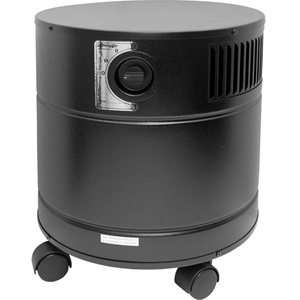 Talking about size, the 4000 Series Exec models are the smallest in this range. The units from the 5000 and 6000 Series are a little larger, respectively. This is probably due to the carbon filter – it is smaller in the older series.  For instance, the AllerAir 4000 Exec UV air purifier has a 10-lb MAC-B filter, while the carbon filter in the AllerAir 6000 weighs 24 lb.

It is only logical – the more carbon, the more micropores available, and the more effectively the filter traps chemicals and odors. The carbon filters from the 5000 Series are somewhere in between – they weigh 18 lb, like the one featured in the AllerAir 5000 Exec, but it is still a lot, compared to other those little carbon filters in most units that are practically worthless.

But the real king of the filters is the HEPA filter which removes 99.97% of 0.3 micron paticles from the air flowing through it and 100% the particles larger than 1 micron, capturing all mold spores and almost all bacteria.

If you approach everything (including the air purification system in your house) seriously, you will find the AllerAir Exec air purifiers to your taste because they are too effective to be simple home air purifiers and have an almost industrial feel to them.