The more you do something, the better you become at it. It is only logical that after launching the AllerAir 4000 series, AllerAir has progressed to a more advanced series – the AllerAir 5000 Series.

The purification system has remained basically the same – first, dust particles are captured by a pre-filter, then gases and odors are locked in by a mass activated carbon bed and mold, bacteria, and viruses are destroyed by two anti-microbial filters. And, finally, if there is anything left after that powerful attack, the powerful HEPA filter will complete the job.

What has been improved is the range of models and their designs – there are 19 models in seven colors – silver, copper, pewter, black, white, red and sandstone, in contrast to just the two colors and ten models available in the AllerAir 4000 series, meaning that you can color-coordinate your AllerAir 5000  air purifier with your interior design. 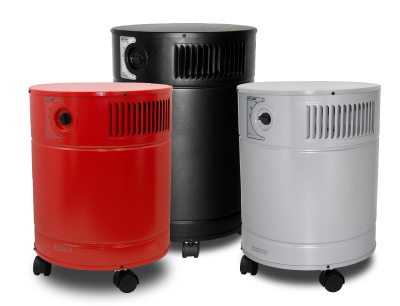 The other two unusually looking air purifiers in this series are the AllerAir 5000 W Exec and the AllerAir 5000 W Vocarb – they use a special source-capture attachment to remove the chemicals and odors directly at their source, if there is one in particular.

At least at first sight, there is no difference between them – both feature a carbon Filter, electrostatic Particle Filter, cotton pre-filter as well as a micro-HEPA filter and a UV Light as an additional option, but the more expensive one has been designed specifically for people with Multiple Chemical Sensitivity (MCS) and allergies.

All AllerAir 5000 cover quite a large area – 1500 square feet, which means that, potentially, just one air cleaner would be enough for an apartment/house with two bedrooms and baths.

Overall, you can’t go wrong with the purifiers from the AllerAir 5000 series – they are powerful, efficient and reliable devices.