The Airpura P600 is a top of the line air purifier with a top of the line price: $1,000. It is made in Quebec by Airpura Industries, Inc. This model has not only a high efficiency particle air (HEPA) filter, but also a carbon filter, a pre-filter, an ultraviolet lamp, and a titanium dioxide photocatalytic oxidizer. It has a high powered 560 cubic feet per minute fan (measured without the filters installed), and is one of the most powerful on the market. Though Airpura claims that the machine can purify the air in a 2,000 square foot area, practically speaking, it is probably more like 700 square feet, which is still pretty large. 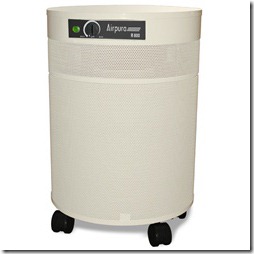 The particular combination of filters in the Airpura 600 filters out a number of substances, including radon, formaldehyde, mercury vapor, exhaust fumes, molds, and a number of other substances you don’t want in the air you breathe. The pre-filter can be vacuumed with a brush attachment on a regular vacuum once a month and is expected to last for 12 months. The carbon filter really does its job, with its two inch thick carbon beds. The life of the carbon filter is estimated to be 24 months, but will vary depending on factors like indoor pets and cigarette smoke. The HEPA filter can last three to five years under normal use.

Airpura’s ultraviolet lamp is much more powerful than the ultraviolet lamps in other air purifiers and lasts for 13 months. The titanium dioxide photocatalytic oxidization grid, which is activated by ultraviolet light, breaks airborne particles down into smaller, non-toxic pieces. It is claimed to last for 18 months. This air purifier is powerful enough for use by people with compromised immune systems and those with sensitivities to multiple chemicals.

Nice features of the Airpura P600 include upward air flow with 360 degree uptake, which reduces drafts, and its extreme quiet at its lowest setting (28 decibels). On the highest setting, it registers at 62 dB, which is fairly quiet for the amount of power this air purifier has. The Airpura P600 is cylindrical, 22 inches high, and 15 inches in diameter. It is heavy at 45 lbs., but is on wheels.

Complaints are mostly limited to the high price of the air purifier itself, and the high price of replacement components like filters and the UV lamp. Replacing these on the recommended schedule could easily bring maintenance costs close to $500 per year. Another complaint is that it does not have automated controls, and no odor or dust sensors to automatically adjust the speed to match the level of air impurities. Such features are found on many less expensive air purifiers. There is also no remote control, which is a feature starting to be available with more mid-range air purifiers. Except for these drawbacks, the Airpura 600 is a high-end air purifier that is well built and does its job very well.